She was adopted from Bogota, Colombia when she was six weeks old by the whitest people in Massachusetts - and if you know Massachusetts, that’s really saying something! Jessica has been improvising all over NYC since 1999 and LA since 2011. Her first improv training was with Paul Sills at The New Actors Workshop, and Amy Poehler, Matt Walsh, Armando Diaz and Ian Roberts at Upright Citizens Brigade Theatre. 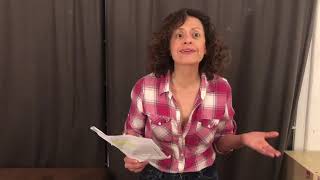 Jessica co-created, co-wrote and co-produced the popular web series 'The Real Housewives of South Boston' with Paulilu Productions. You may have seen her recently on NBC's "Superstore" or looking for 'Charlie!' in a Liberty Mutual commercial. Jessica has written and performed two one person shows, 'American Standard' and 'Staunch'. She also co-wrote and performed, along with her husband, a successful sketch show at the Upright Citizens Brigade Theatre NY and LA "D-Bags, A-Holes & Lovers". Time Out New York said, "Eason and Eason have great chemistry onstage...This duo is definitely one to watch."