Join us for a screening and discussion of "My Brother is Deaf," an acclaimed short documentary that premiered at Slamdance Film Festival and has won awards at film festivals all over the US, including Best Documentary Short at the recent DC Independent Film Festival.

The film follows a family as they discover one of their children is deaf, and then embark on a journey to discover how best to adjust to this new reality. Combining his extensive experience with narrative filmmaking with deeply personal and socially relevant subject matter, filmmaker Peter Hoffman Kimball has created a moving, heartwarming film.

Following the screening, Kimball and Deaf filmmaker Gary Brooks will discuss the making of the film, the intersection of fiction and documentary filmmaking, and the benefits and responsibilities of working with Deaf actors. They will also discuss their upcoming film, "Millstone," shot entirely in American Sign Language and starring Daniel Durant from the Oscar-Nominated film CODA. This promises to be a fantastic event for anyone interested in documentary, narrative fiction, Deaf filmmaking, and independent film.

Peter Kimball is a screenwriter, filmmaker, and professor based in Washington, DC. His films have played at festivals all over the world including Slamdance, Vancouver, DC Shorts, and Calgary. His comedy fiction podcast, “Russell Gets Revenge,” was ranked one of the top ten fiction podcasts of 2020. He is a graduate of Brown University and currently teaches at George Mason University.

My Brother is Deaf - Trailer from PK on Vimeo. 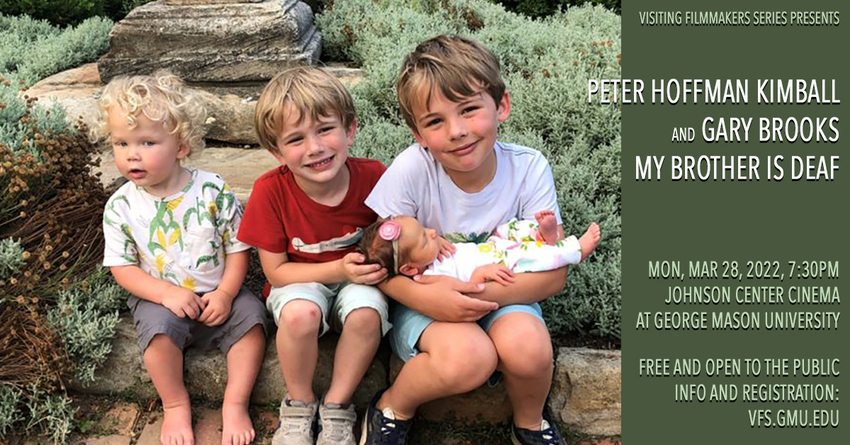