Join the conversation after the screening

Winner of the 2014 Sundance Film Festival's Special Jury Award for Breakthrough Talent, Dear White People is a sly, provocative satire of race relations in the age of Obama. Writer/director Justin Simien follows a group of African American students as they navigate campus life and racial politics at a predominantly white college in a sharp and funny feature film debut that earned him a spot on Variety's annual "10 Directors to Watch." 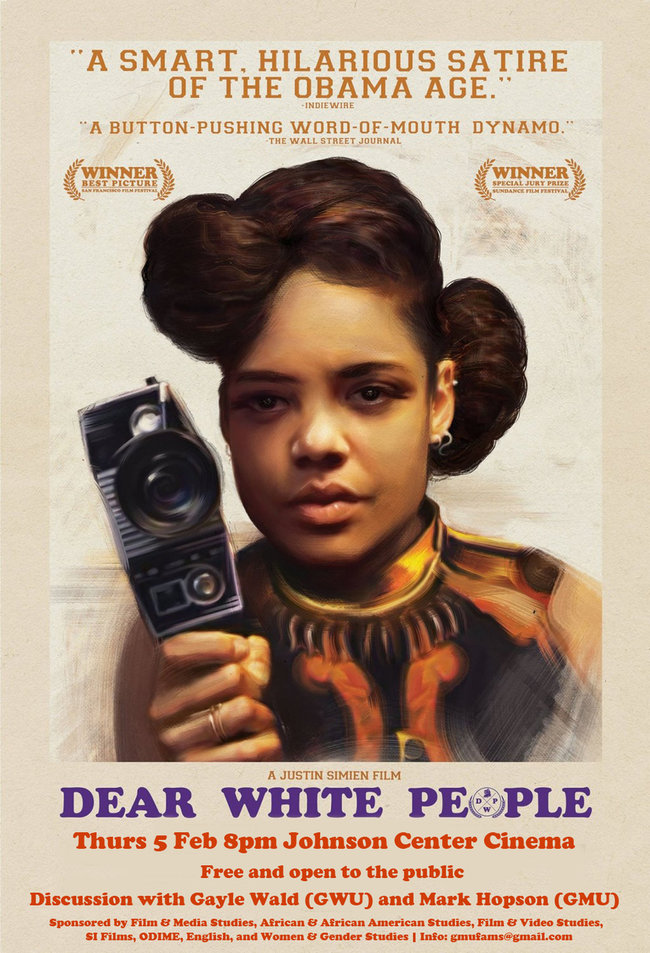 Synopsis: The unexpected election of activist Samantha White (Tessa Thompson) as head of a traditionally black residence hall sets up a college campus culture war that challenges conventional notions of what it means to be black. While Sam leverages her notoriety as host of the provocative and polarizing radio show "Dear White People" to try to prevent the college from diversifying Armstrong Parker House, outgoing head-of-house Troy Fairbanks (Brandon P. Bell), son of the university's dean (Dennis Haysbert), defies his father's lofty expectations by applying to join the staff of Pastiche, the college's influential humor magazine. No one at Winchester University is prepared for Pastiche's outrageous, ill-conceived annual Halloween party, with its "unleash your inner Negro" theme throwing oil on an already smoldering fire of resentment and misunderstanding.

New York Magazine's Bilge Ebiri writes, "Justin Simien’s Dear White People positions itself as a skewering of racial attitudes among students and faculty at a prestigious university, but, at heart, it’s a touching, even earnest story about acceptance — or, rather, our longing for said acceptance. That the film’s satire isn’t contradicted by its sincerity is certainly a testament to the talents of this young director and his impeccable cast. But it also maybe says something about our own racial moment. The film is called Dear White People, but it might as well be called Dear Everybody. It’s hilarious, and just about everyone will wince with recognition at some point in the film."

Justin Simien says, "This movie, while it is about [the black experience], it's really about identity. If there's any reason why people, no matter what they look like, are responding to the film, I have to owe it to that realization that I made at some point that I'm talking about this through a black lens, but I'm talking about something that's universal."