Our screening and discussion will be the closing event for George Mason University's fifth annual Day of Service.

Almost Sunrise follows two Iraq veterans, Tom Voss and Anthony Anderson, both tormented by depression for years after they returned home and pushed to the edge of suicide. The two embark on an extraordinary journey, a 2,700 mile walk across the country from Wisconsin to California, in order to reflect on their haunting experiences of war and to save themselves.

The documentary opens by noting the alarming statistic that 22 US war veterans kill themselves each day. The Hollywood Reporter writes, "Exploring the ramifications of that state of affairs while introducing a concept dubbed "Moral Injury," Almost Sunrise makes for powerful viewing." Showcased at NYC's Human Rights Watch Film Festival, it will premiere as part of PBS' POV series on 13 November 2017.

See this interview with director Michael Collins: "We want to make an entertaining film that can stand on its own, but it was also important for us that the film be a tool to bring about change in the world. That was part of our vision from the earliest stages of research. Almost Sunrise is one piece of media in a larger campaign that allows viewers to engage with these issues beyond the screening and the Q&A. This way, viewers can do something in the real world. Instead of just leaving the theatre with a feeling, they can put it that feeling into action."

Our screening will be followed by a Q&A with Michael Collins and Marty Syjuco.

Our discussion will be moderated by Dr. Patricia Maulden, Associate Professor of Conflict Resolution and Director of the Dialogue and Difference Project with The School for Conflict Analysis and Resolution. 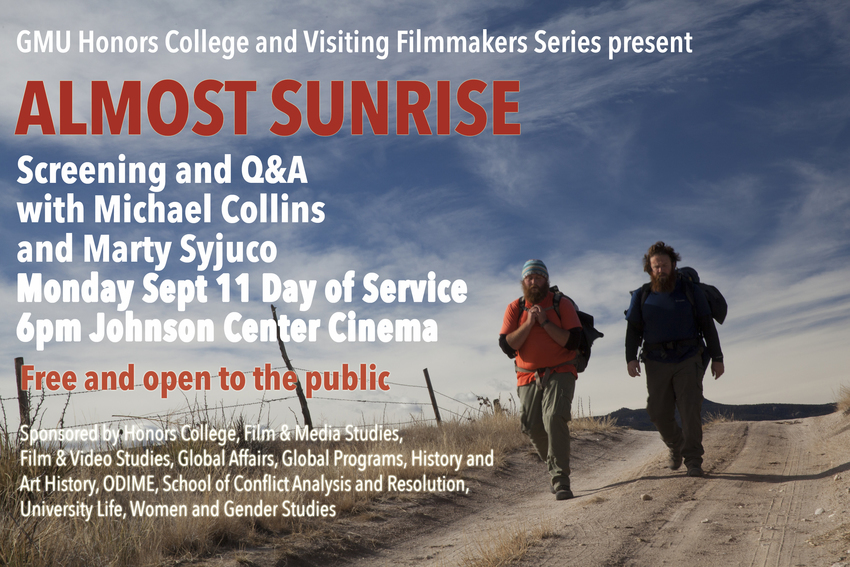